Posted on September 16, 2010 by Lina Martensson

I just finished my last race for the season at the Folsom Cyclebration. The last month ended up being make-your-own-stage-race season: inaugurated with the San Ardo-University duo and cheap-ish hotels, followed by the Winters-Vacaville-Vacaville* trifecta and a stay at the Metromint Zoo** in Davis, with the Challenge Challenge-Giro di SF birthday party with a houseboat stay, and completed with the three-day Folsom Cyclebration TT, crit, and circuit race. I also managed to finish “in the T-shirts” a couple of times this season and I’ve proudly worn my tent sized, mustard yellow Patterson Pass T-shirt in bed at night. It’s not very flattering, but hey! It’s a coveted Velo Promo T-shirt!

The Folsom Cyclebration ended up being a much better end to the season than I could ever imagine. With it being a 1/2/3 race, my chances of doing much of anything were slim I thought.

But then Molly emailed me the night before the time trial and asked if I wanted to use her old TT bike in the race. YES!

In case anyone doesn’t know this already, Molly is a crazy good time trialist and wins almost all of them. I heard a couple of people beat her some time last summer, at some little race called something along the lines of “Masters TT World Championships”, but other than that, she pretty much always wins.

Her wizard husband Rob set me up on her bike and I felt totally badass. I had a disc wheel and everything! And with Molly’s bike karma, obviously I would win! Never mind that Molly was also riding Molly’s bike, except the newer and fancier version, and that she’s Molly. And that there were all these other people in the race.

That was a joke… but as it turns out, Molly’s bike is magic, and I GOT SECOND! Getting second after Molly in a TT is pretty much like winning, since there’s no way anyone will beat her! Here’s Molly and I on the TT “podium”:

Then I got like third to last or something in the crit, as I had expected.

The circuit race was a lot better! It looked kind of like this as my break went through one of the hairpins:

This resulted in a podium that looked kind of like this:

And – holy shit! They let the silly cat 3 girl onto the podium for the omnium as well!

I’m not really sure how that happened, but there’s a race report about it. 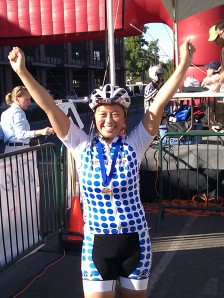 Photo not taken by Rob!

And after this, Tina and I went home for the final meeting for the now somewhat obsolete Support Group for Girls with Training Plans. We found an aptly named beer at Monk’s Kettle and had one each to celebrate Tina’s victory, Molly’s TT win and 3rd in the omnium, and that I was somehow allowed to sneak in on the podium photos above.

* That race is worth doing twice!

This entry was posted in Uncategorized. Bookmark the permalink.