It’s been a year since I was here. Last time I went, I had two cats. They moved in with my parents when I moved to the US. Lilo was thrilled to see me, Ada was grumpy – why had I abandoned her? 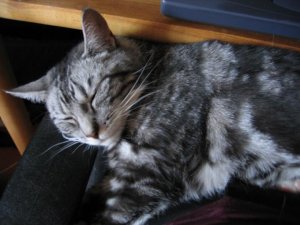 Lilo became ill this spring, and had to be put down within days. My parents and I thought Ada would be devastated without the sister she’s lived with all her life, but I guess we were anthropomorphizing and instead she appeared to become a happier cat when not competing with her sister about everything. (Not that she ever had to; Lilo was a chill cat who would leave Ada alone if Ada left her alone, but somehow Ada felt the need to defend her territory and food and milk and blanket and… now she doesn’t even want the milk anymore, when there isn’t anyone else around that might want it.)

Well, gone is the grumpiness. I stepped in the door, picked up Ada and held her in a way that she won’t allow my parents to hold her, and she was cuddling and going crazy. She slept propped up against my legs under the hot duvet all night. This kitty, who usually goes ballistic if she hasn’t been fed by 6:30 am, was still lying in bed with me at 11 am and didn’t even walk downstairs to the kitchen until I had brushed my teeth and was walking downstairs, too. She’s just as happy to see me as I am to see her! 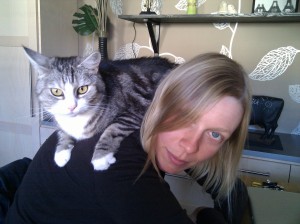 I tried taking her for a walk in the garden, but it ended up more like she taking me for a walk… 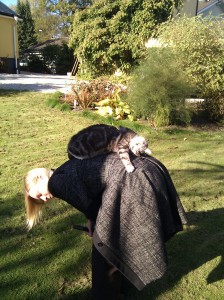 Mostly it’s been good except of course I had this brilliant idea to take the train to Stockholm. I had this memory of trains in Sweden being efficient, on time, reasonably priced. That illusion was crushed during my visit last year when 2/3 trains were delayed by half an hour or more, and I realized that tickets cost a leg and an arm once you’re above the age of 26. Despite this, I embarked on a train to Stockholm at 4:32 pm, for a supposed 5 hour long train ride.

I’m currently exploring the joys of being in the 1st class car. I appreciated the lessened strain on the environment presented by the lack of electricity in our car for the first hour, and was looking forward to a cozy 5-hour train trip in the dark during which I’d certainly be able to bond with my fellow passengers but eventually the power supply was fixed. Then we went along just fine for a while until we got a closer look at nature as the train stopped somewhere in the middle of the woods. Again, we experienced why 1st class is better – we have disco lights! Turning on and off every second.

Vacation, just like the rest of life, should mostly be about food. As appropriate, I’ve been eating the kind of stuff people eat in Sweden, and thus this post shall be filed in the category “I’m Swedish, I eat shit like this”. First off, dinner  with my parents last night (and I apologize for my crappy food photos): 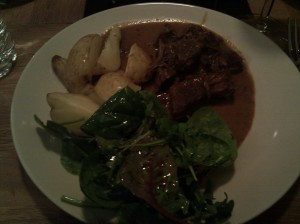 This was paired with bicycle wine! 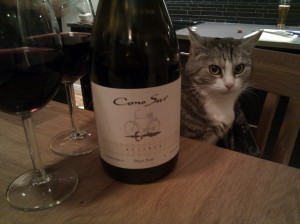 The observant reader may notice the glass of beer in the background; my mom intends to doublefist.

Breakfast consisted of a sandwich with mackerel in tomato sauce from a tin, and a sandwich with a slice of roast beef, fried onion, and unfortunately no remoulade sauce. 😦 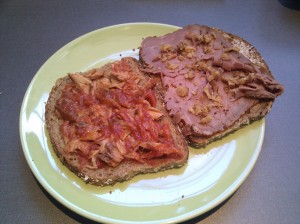 It didn't look like roadkill outside of the photo...

Our lunch may look familiar: Swedish meatballs! (But we just call them meatballs.) Potatoes, cream sauce, lingonberry jam, pickles, sauteed chanterelles. The salad is perhaps less classic; in the old days no one bothered with such sissy accessories and everyone were Real Men, including the women. (It’s a wonder they could breed and didn’t all have scurvy.) My dad still tries to avoid the green stuff, but my mom makes him eat it. I don’t think that qualifies him as a Real Man. 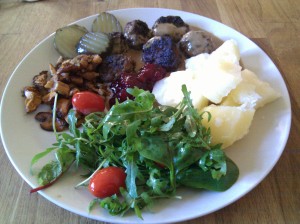 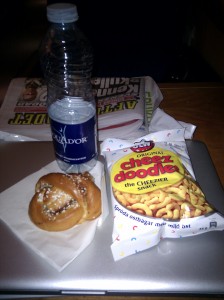 Fuck the environment. I’m flying back from Stockholm. As a bonus, it’ll probably be cheaper than the train. (I’m not kidding. It often is. I said it cost an arm and a leg!) We’ve been stuck in the middle of the woods for three hours now, waiting for a new locomotive. The train cafe has since long run out of food, and my dinner is pictured above: cinnamon roll and cheetos.

I’m being reminded of culture in Sweden and, as if it were necessary, more on the (lack of) reliability of the trains. “No, we won’t make a fuss about it, we’re Swedish,” someone said on her phone. Someone else decided to deal with it by drinking beer. He just came back from the shop with his 4th and 5th.

“I don’t think it’s the locomotivate that’s broken… maybe it’s our car?”
“Or us?”
“Yeah, I think it’s us…”
“Just like us Swedes. We don’t get mad, we start thinking it’s us that are faulty.”

My mom has also been calling with motherly advice. I thought that her suggestion of starting to eat my fellow passengers was somewhat premature as everyone is still alive, but I’m starting to pick out the weak ones and my mom estimates that I could start eating them by Thursday.

No movies on my laptop. No games. (And no Internet neither there or in my phone.) But I found a drawing app! I drew this:

Me and the train. It didn't actually catch on fire; that's an expression of artistic freedom.

The train is finally moving! We felt a slight movement, but weren’t entirely able to see outside as it’s pitch black in the woods. As I was leaning out of the window to try to see whether we were moving, tada! The lights went out and with the car being pitch black, we can now see the treetops moving. Slowly. It’s 11 pm and it’s at least another three hours to Stockholm. 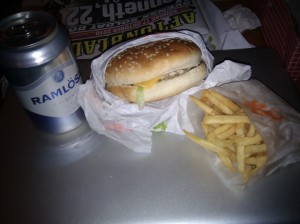 Cold burger and fries from Max!

Yaaay! The train company is not all evil – they got burgers, fries, bean salad, and water for everyone. I’ve just finished what almost resembles Real Food and this was probably the best cold burger I’ve ever had. (Competition isn’t particularly stiff.) I can’t really say the same for the cold fries – there is no such thing as “the best cold fries ever” regardless of lack of competition. Unless, perhaps, you’re stuck in the Andes or perhaps in a mine for weeks on end. Sitting in the 1st class train chair for a few hours doesn’t really qualify for that. Also, somehow coffee and croissants just appeared!

WE ARRIVED! Next up: retrieve a taxi coupon from the train company and fight with hundreds of other train travelers over an insufficient number of taxis. 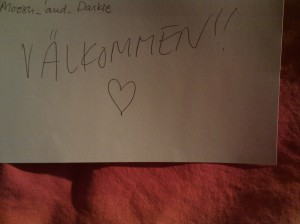 This entry was posted in I'm Swedish, I eat shit like this, Swedish shit. Bookmark the permalink.